With the Stache Classic less than twenty days away, it’s time for an update.

During the past three weekends, thirty-two of the best Splinterlanders of each ranked tier have battled it out in a double-elimination format tournament, with the top 8 players advancing to the Stache Classic on October 16th and sharing $25,000 in crypto prizes.

Twenty-four contestants have advanced through the first three weeks of qualifiers, with eight apiece coming from the Diamond, Gold, and Silver Leagues.

After that, the Stache Classic will have all thirty-two participants, and the bracket for the main event will be on the ZenSports app.

On October 16th, CryptoStache himself will join us for the main event – The Stache Classic.

To provide more balanced grounds for this event, we devised a relatively novel qualification process, providing an effect that carries over into the main event.

As mentioned, eight players will qualify from each ranked division: Diamond, Gold, Silver, and Bronze.

During the event, head-to-head matches will be played at the lower-ranked division of the two contestants. If a matchup were Diamond Seed #X vs. Bronze Seed #Y, the contestants would play the match with a Bronze League Ruleset.

We believe this adjustment will balance out the matches, given a straight-up Diamond League tournament would favor those with the most power.

Just like the fantastic trophy from the Cerberus Cup, NFT Horizon is creating an epic, 1-of-1, CryptoStache-themed NFT Trophy for the tournament’s winner to take home.

Stay up-to-date with NFT Horizon on Twitter to catch the trophy release and participate in their giveaways/drop announcements.

Once the bracket is populated, we will begin the Bracket Prediction Contest, allowing you to win free Splinterlands prizes for predicting the results of the Stache Classic on October 16th.

While we usually give away ten Beta Booster Packs for the top ten predictions, we are going WAY bigger for the main event.

The ONLY WAY to make a bracket prediction is via our Discord Server, located in the official-announcements channel.

How to Watch and Win

The Stache Classic will be on both ZenSports’ Theta and Twitch channels. All giveaways, however, will be organized through Theta, so make sure you have your account ready for the event if you are not signed up already.

As mentioned, there will be giveaways, tons of them. We hope to see you there, so make sure you have the date saved – October 16th! 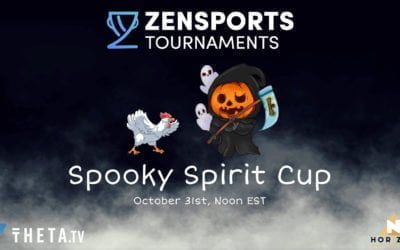